Skip to main content
Labels
Posted by Unknown May 03, 2018

You Were Never Really Here: A Sacrificial Process 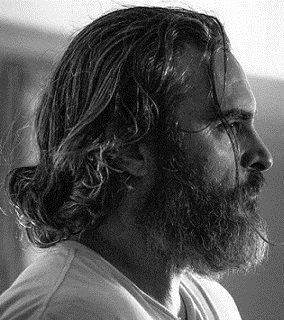 The first sign of a great film is how it communicates with one. In Ms. Ramsay's case, it's through the frames and shots. Some via the smash cuts while some are the exact opposite consisting of long lens close-ups. While this method it's not an original invention, the filmmaker has concocted it with a sense of style to devise such a way to communicate with the viewer. However, it's important to keep in mind that the makers differ. Each person is born of different, yet unique personality. So, art—a film, delivered by its maker seem unique and often times unimportant, which is unfortunate, but at times also essential. The essential aspect is being focused on here, for not just any maker can borrow the method of frame and shots to communicate effectively.

Ms. Ramsay puts the sound to use and often with close-ups to deliver a sense of paranoia and the urge for air. The damaged, Joe, through flashbacks, is found often in a clear plastic bag of a misty surface as it stretches smooth while droplets of moisture forming. Joe is the avatar of every viewer. A simple man. The viewer understands Joe is an army veteran and  vigilante for hire—a tool for Ramsay to use so she can capture the world and the people around him. Joe, a loose cannon, is non-spiritual in search of not the truth or meaning in life, but his soul maybe.

The plot is simple and is less essential, for Ramsay understands the viewer could be occupied with the unsettling nature of the character. Ramsay could present the world as normal as possible. Yet that wouldn't be of her style. Her method is simply too uncomfortable, yet strategic. The viewer witnesses that despite the twisted nature of reality of the character, Ramsay is still fond of innocuous objects at times such as the shots of necklace, socks, the mother's glasses, even a drop of water streaming against wet hair. Yet the innocence falls short, although it relates a good deal to Joe and the character of Nina, whom Joe is trying to save from the sex traffickers.

Ramsay's handling of action and violence masterfully remain grounded, relying heavily on the method mentioned earlier and of course, style. If she is putting her central character in hand to hand combat with another character while both are on the floor, their reflection is on the ceiling mirror already, which has stylistically been shattered by a bullet. Or the sequence before the hand to hand combat in which Ramsay shows how one of the characters enter frame holding a gun equipped with a suppressor, especially after the door opens slow and wide.

The viewer's experience of images and sound is the tour de force of music and editing. In the same room before the action begins, the character of Nina gets picked up by one of the intruders as Joe watches. While the viewer knows Nina is on the man's shoulder, Ramsay instead rotates, stylishly her camera, focusing on her feet dangling in socks, exiting the room, then her face exiting the frame injecting the absolute sense of not just paranoia, but discomfort, loneliness and as well as most importantly the central character's failure.

Highly stylize, though, as if Ramsay is a painter, there's a funeral sequence to not show that she's a capable filmmaker as she is, but putting the viewer in a state of utmost strangeness—detached from everything that life consists of such as nature, physical pain and love. There is just sorrow and thanks to Joe, limned by Joaquin Phoenix.

While barely scratching the surface, the paragraphs above only is pointing the prowess of not an ordinary filmmaker here, whose film is a mental journey, a physical process; a living thing of sorts; poetic and alive, once touched it bites back.

Ramsay's lenses are as if only enhancing the viewer's vision to survey the atmosphere, the nature of the film itself, its true taste, then pulling back, exiting the same way it came. That's one of the early shots at the hotel lobby. A great film of this kind is somatic—intoxicating, pulling the audience in to join a ritual sacrifice. Film viewing is a sacrificial process, perhaps. Personal to its maker, yet physical with the viewer.